Thompson Delighted After Joining The Lions 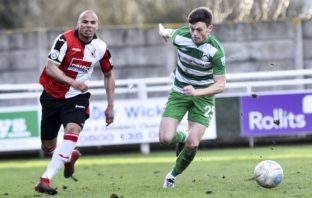 Striker Reece Thompson says the ambitions of the club made it an easy decision to join Guiseley AFC.

The forward joined after spells at York City and North Ferriby United, speaking about his decision to make the move, Thompson explained how it all came about, writes Tom Feaheny.

"My agent got in touch with me saying Guiseley were interested in signing me and it went on from there really. It was very important for me to stay at this level which will help me improve more as a player.

"I'm very happy, it is a great club with good ambitions for the future, now I want to work really hard for the rest of my teammates and get some goals."

After scoring 12 goals last season for the Villagers, Thompson says he enjoyed his time playing at the EON Visual Media Stadium.

"North Ferriby is a great friendly club. I want to thank Steve Housham and Darryn Stamp as they put their trust in me to play week in week out.

"Hopefully I repaid them with some of the goals I scored. My best moment for me personally was scoring against York city at their place and winning the game."

End Of An Era At Oxford City  One of the longest-serving club officials in the country has announced he is standing down.