Rhead Warns Reds Are Ready To Put In A Promotion Charge 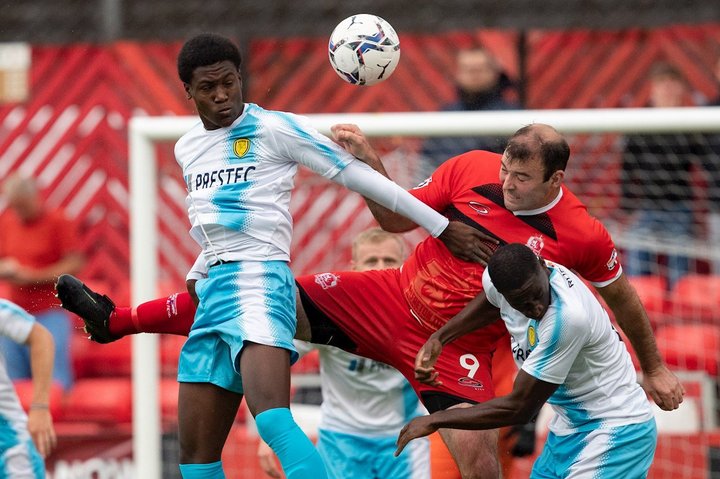 Alfreton Town are together and ready to be involved in the National League North promotion shake-up, new striker Matt Rhead warns.

The powerful frontman has joined the Reds after leading the line for Boreham Wood last season.

Rhead, a National League title winner with Mansfield Town in 2013 and Lincoln City four years ago, can sense something is happening at the Impact Arena.

He wasn’t just impressed by the goals in their impressive 4-1 win over higher-ranked King’s Lynn Town on Saturday.

He says the togetherness when it got a bit rough is also an indicator that things are heading in the right direction.

“I’m very impressed with the team, the gaffer has brought some really good players in,” he told the club’s video player.

“You can see there’s quality in every position - everyone is under pressure for their place and that’s what you want, competition for places.

“We could have scored more on Saturday against a strong team, so that’s a good sign. If we can keep the standards where they are and push them on, then we’ve got a good chance.”

Billy Heath’s side start the new campaign with a trip to Blyth Spartans on Saturday.

The battering-ram striker has told centre-backs he is feeling ready to go - and is eyeing more honours.

“I feel good myself,” he added. “I feel really strong and really fit.

“I’ve said throughout my career that part-time football is the hardest football. The lads are working, the travel is tough and it’s tiring, but this is such a good group.

“They get on and work hard for each other. There was even a little scuffle at the end of the game on Saturday, and you can see us all together - that’s a really good sign.

“Every team I have ever done well in are together like that.”

 Sports Set For A Big Hello & For Sergio's Sad Goodbye Danny Bloor knows many will be thinking last season’s heights can’t be reached again by Eastbourne Borough, but he’s going to have fun trying.

Danny Doing Things Differently To Get His Shots Soaring  It took next to no time to realise this close-season catch up with Danny Searle wasn’t going to centre around Aldershot Town’s hopes and fears ahead of the new campaign. It quickly went deeper than the big kick-off.