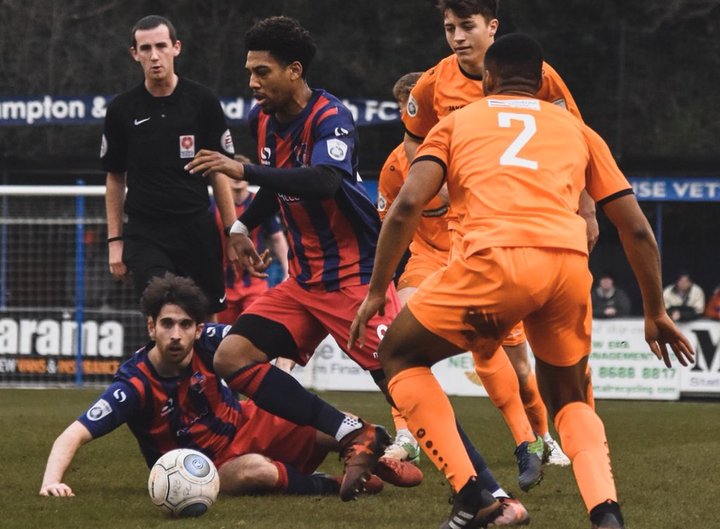 Alan Dowson admits some of his Hampton & Richmond Borough players have let him down after their winless run was extended to five matches.

The Beavers’ recent poor run saw them fall out of the National League South title race and they are now looking to get back to winning ways before the play-offs begin.

They have now dropped to fourth in the table following Saturday’s home draw with Gloucester City.

Experienced Dowson says he won’t stop searching for the answer to Hampton’s problems but thinks his players need to look in the mirror.

The boss told the club’s Twitter page: “It was really frustrating again. We had all of the possession and they (Gloucester) only came into our half once in the first half and scored which killed us.

“We need to get back to winning ways as quickly as we can. It’s only five games so it’s not a disaster. I always try to protect the players but maybe they have to look at themselves.

“I’ll have to look at what else I can do. At the moment I’ve been a hard man with them, gone soft with them, put my arm around them, got extra training nights or less training nights. I’m trying everything to get that tweak we need to get us back cracking again.

“I’m gutted to be honest and feel a bit let down. In 12 years as a manager, I’ve never really said a player has let me down. But I’ve seen one or two this season that I feel have let me or the club down with their attitude.”

 BT Cameras Roll! An Additional Live TV Game Is Announced BT Sport have confirmed another live match next weekend - and this time the bubbly could be flowing.

Cards Collapse Leaves Them Needing Help From Others  Jason Goodliffe accepts it’s going to take a “very big effort” to keep Woking in the National League now and fears it’s now out of the club’s hands.