Ellis On The Mark As Notts Edge Meadow Lane Thriller 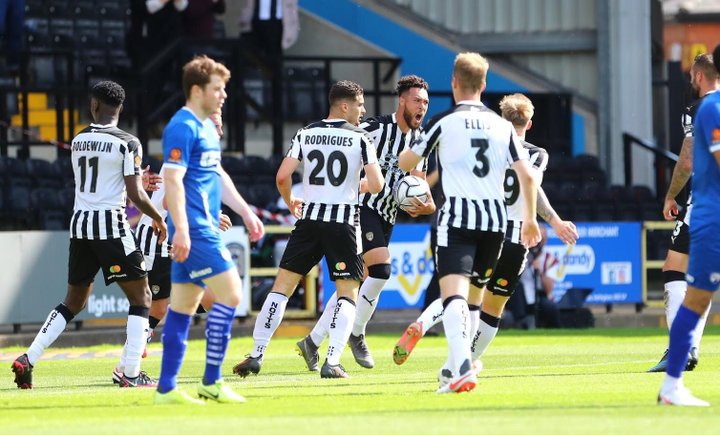 A late winner from Mark Ellis booked Notts County’s place in the National League play-off semi-finals after a frantic eliminator at Meadow Lane.

The on-loan defender had the final say as Notts twice came from behind against Chesterfield who twice led through, first through Danny Rowe and then Liam Mandeville.

An intense first half-hour got the goal it deserved via Danny Rowe’s powerful 30-yard free kick.

Ruben Rodrigues charged down and blocked a clearance to set himself free. After rounding the keeper, the ball fell into the path of Wootton to tap home.

Chesterfield went ahead once more when Danny Rowe led a counter, slipping in Jack Clarke who flashed a ball across the box for Mandeville to prod home.

Over 4,000 Notts fans wanted a response after the break. And they certainly got one.

With 71 minutes on the clock, Mark Ellis rose highest from a corner to nod the ball into Wootton who did the rest to level things up.

Chesterfield almost hit back immediately but Curtis Weston could only blaze wide from Nathan Tyson’s pull back.

Tyson himself could have had a big say in things when he went clean through. But Sam Slocombe denied him when he really should’ve scored.

With little over a minute left on the clock, Mark Ellis found himself with a free header from Ruben Rodrigues’ deep free kick to set-up a trip to Torquay United next week.

 It's Oates So Simple For Rhys As Rampant Pools March On Rhys Oates took the play-offs by the scruff of the neck to put Hartlepool one win away from the Vanarama Promotion Final.