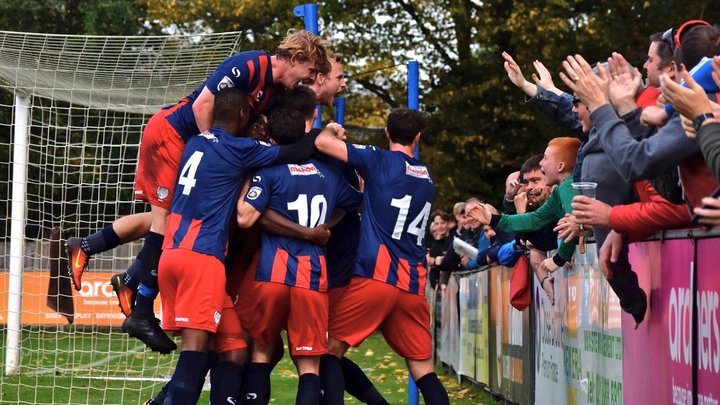 Hampton & Richmond boss Alan Dowson had no option but to praise his players after a fantastic victory at Wealdstone.

Elliott Charles’ first-half hat-trick sealed a fine 3-0 win at The Vale and kept the Beavers third in the enthralling National League South.

Dowson’s side are just two points off leaders Dartford and the boss said he had to tell his players just how good they were - not that he likes to!

“You’ve got to be good to beat a side like Wealdstone and I thought we were excellent,” he told the club’s Twitter feed.

“I’m not one to give a lot of praise because we go game by game. But we worked our socks off and you won’t get many better away performances than that.

“Our back four were unbelievable, the midfield worked well and the forward we’ve been crying out for (Charles) scored three.

“The character from the squad is incredible and I’m full of praise for them and the supporters who I thought were excellent.”

 Solihull Moors` Charlie Fogarty - An Inspiration To All Solihull Moors have reported many times that Charlie, son of Head of Sport Mark Fogarty, has become a celebrity for his inspiring motivational lectures “Anything is Possible”

Back To Back Moors Wins Delight Yates  Solihull Moors boss Mark Yates says the two wins in three days the side have picked up, shows the fight within the group.