Dedicated Duo Are May's Volunteer of the Month Winners! 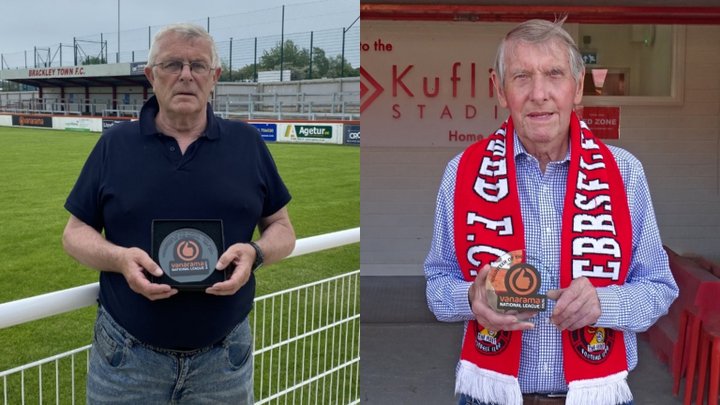 It’s usually at around this time of the year when the trophies are being dished out for on-the-field achievement.

Things are different this year, but at least we have the Vanarama Volunteer of the Month Awards as those who give up their time are rightly acknowledged.

Fans are counting down the days, and they aren’t the only ones with preparation for when football does return already well under way.

At Ebbsfleet United, pensioner Percy Scudder is making sure when fans can see their team play again they have a spick and span home to come back to.

Aged 83, the former decorator has put his many years in the trade to good use.

He has single-handedly revitalised many areas of the Fleet’s ground, giving some TLC to one of the club’s 115-year-old stands too.

Lockdown hasn’t put him off, turning up at the ground with paintbrush, roller tray, step ladder
and overalls in hand ready for action.

In the National League North, the tools have been out behind-the-scenes too.

Brackley Town superfan Alan Bannard typifies what volunteering is all about.

Most days he devotes several hours to club work, supporting the ground staff as much as possible.

He lends a hand with painting, under-taking repairs, removals, and the maintenance of key equipment.

He’s not afraid of a big tip run to help clear some space at St James Park, either.

Only a little break to collect his grandchildren from school can disrupt his rhythm!

 National League's May Monthly Award Winners Revealed! After a challenging season like no other, May was when we started to see some silverware placed in hands.

Eliminators Are On The Menu With A BT Sport Double Bill  It’s play-off time, and if you thought the final day of the Vanarama National League season was electrifying, let us introduce you to the Eliminators!