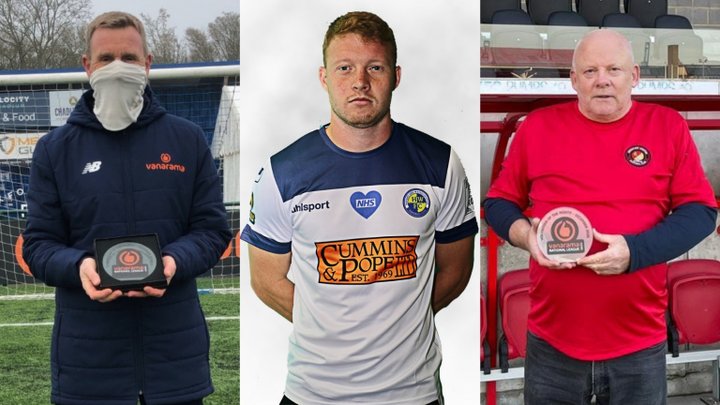 December was an important month in Vanarama National League South – so the time is right to honour the division's big achievers.

We’re delighted to present the Manager, Player and the Vanarama Volunteer of the Month to you as the season began to really take shape.

Oxford City had sent out warning signs in November, including a famous FA Cup triumph over League One’s Northampton Town.

Last month they flexed their muscle in the league as manager David Oldfield built on those foundations.

It started with a stunning 4-1 win at surprise title contenders Hungerford Town.

Then came a battling draw with leaders St Albans City which was quickly followed by a 1-0 success at home to Dulwich Hamlet.

They then won 2-0 at Welling United in the FA Trophy – proving that they plan to make a go of it on three fronts.

Oldfield is our Manager of the Month and he thinks there are good times ahead in 2021.

Havant & Waterlooville fans also hope this could be their year after falling short in the play-offs last time out.

Tommy Wright is getting his love for football back after deciding to take a break from the game.

The energised 24-year-old scored a fine hat-trick as the Hawks humbled Chelmsford City on December 5.

He then went on to get two more as ruthless Havant won 3-0 at Ebbsfleet. The striker also found the net as they edged past Bracknell in the FA Trophy.

Paul Doswell knows all about his talents and he is very much back with a bang after a great end to a tough year.

John Snow is Mr Ebbsfleet United and it is our pleasure to recognise his commitment to the club’s cause.

He makes sure Fleet’s ground is sparkling and has been lending a hand for a number of years.

So far this season he has painted the entire pitch perimeter walls adding yellow lines onto the terraces which is no easy task.

John also removed trees and weed growth from the around the concourse to prevent damage to the stands and the terraces.

They couldn’t keep standards high without him and the dedicated servant is a fixture at the stadium.

Congratulations to our all December Award winners.

 National League's December Monthly Award Winners Revealed! The final month of a challenging year was certainly one to remember for this Vanarama National League trio.