County Are Kings As Stockport Secure Their EFL Return 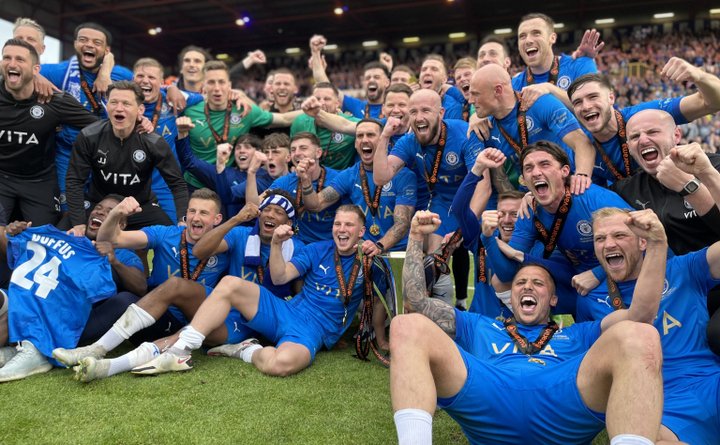 County returned to the EFL after an 11 year absence as they defeated FC Halifax Town 2-0.

Goals from Paddy Madden and Will Collar meant it didn’t matter what happened at Dagenham as Wrexham went down 3-0.

Stockport are champions as they fans filtered onto the pitch before their heroes got their hands on the trophy.

Challinor told us after full-time: “It’s wonderful, it wasn’t easy but we did it.

“It is thoroughly deserved for the players and of course the fans who have stuck by the club.

“But this has to be just the start - I wouldn’t have come here if I didn’t think this club could be very successful.”

It’s the play-offs for Wrexham and for Chesterfield, they grabbed the final spot after getting the point they needed against Woking.

But who will be coming up via the National League North and South?

Daniel Elliott’s double was deadly and the Pilgrims play York City for a place in the National League on Saturday.

 Hargreaves Is Back As A Boss As Chris Gets Glovers Gig Chris Hargreaves has gone from interviewing managers to being one again - he is now at the helm at Yeovil Town.

It's All Down To This! Title Chasers Gear Up For The Big Finale  It’s been a title race that has gripped like no other for many years. Now we finally find out who will be grabbing hold of the silverware that seals that sought-after promotion.