Clarets’ Darts Win Has Shaken Things Up In The South 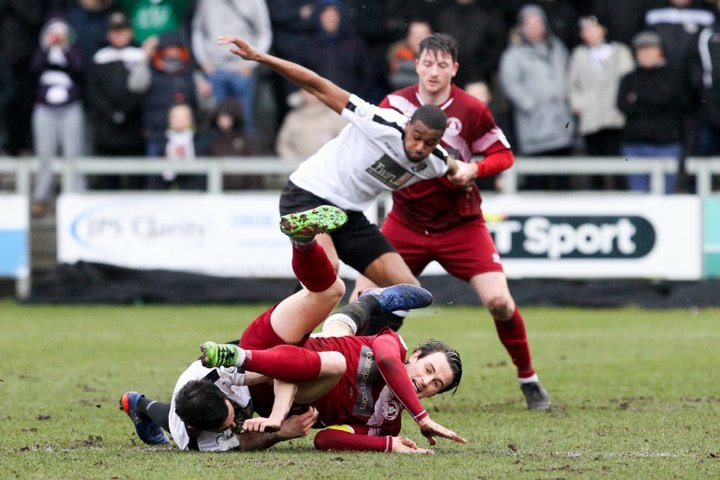 Rod Stringer dedicated Chelmsford City’s stunning last minute win over rivals Dartford to the fans who stuck with the team following a miserable start to 2018.

He then insisted the Clarets are still very much in the National League South title race after doing what no side has managed - beating Tony Burman’s team at home.

A late, great show saw City do from 1-0 down to 2-1 with just five minutes on the clock.

Chelmsford’s title hopes looked all but over after a winless January which brought three defeats but they are now only five points behind the leaders with a game in hand.

“What an unbelievable comeback,” said manager Stringer after an astonishing ending at Princes Park to Clarets TV after the game.

“That was for the supporters. This is my job, but for them this is their football club. They have stuck with us lately when things haven’t been going our way.

“I think yes we got a little bit of luck with the penalty but we worked so hard.

“On a very tough pitch we had to, Dartford are a very good side and the players they have are a real handful

“In the second half they went deep and we just kept pressing. Then we got our moment.

“If it ended a draw I would have said that’s a fair result but our subs I think we better than theirs and they changed the game for us.”

Stringer says the league is now wide open - and taking Dartford’s unbeaten home record could throw the cat amongst the pigeons.

“Anybody from seventh or maybe eighth can still go on and win it. That’s how it is, who knows now?

 Young: Character Against League Leaders Key To Draw FC Halifax Town caretaker manager Neil Young says getting a point at Wrexham who started the day top showed what the team has.

Sick As A Parrot! But Gilchrist Forgets His Tummy Troubles  Jason Gilchrist‘s hat-trick was even more impressive on Saturday - the Southport striker did it with a dodgy belly!