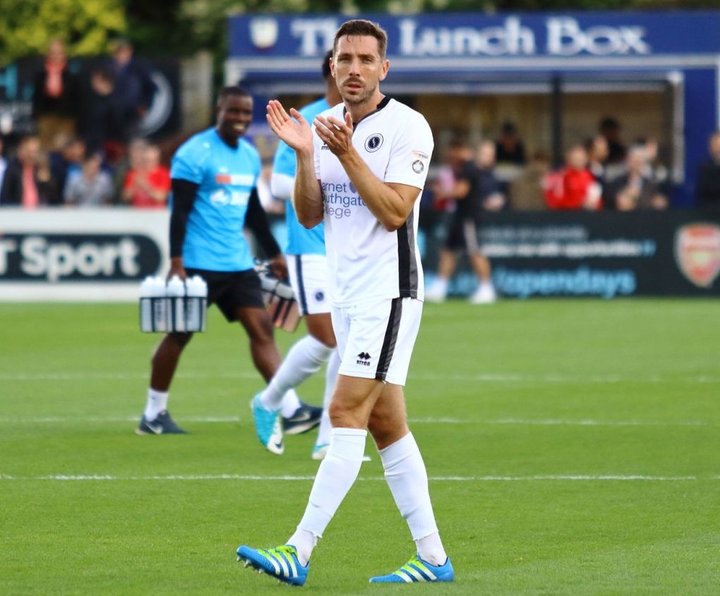 Boreham Wood have announced that vice-captain Tom Champion has signed a new two-year extension with the club.

Champion, who signed in the summer of 2017 following his departure from Barnet, also coaches in the Wood’s BW PASE Academy.

The midfielder-cum-defender made his Wood debut against AFC Fylde on the opening day of the season and scored his first goal for the club in the 2-1 victory over Woking.

The 31-year-old originally came through the academy at Watford but departed for Barnet without making a senior appearance.

He helped the Bees to the Conference (National League) title in his first season at the club and has since played for Bishop’s Stortford, Braintree Town, Dartford and Cambridge United.

Champion then returned to Barnet, where he captained the side in their first season back in the Football League.

Champion joins the influential David Stephens, Mark Ricketts and Kane Smith in signing a new deal, while midfielder Keiran Murtagh was already tied down on a two-year contract.

The club expect to announce one or two further deals in the coming weeks, as they look to continue to shape their squad ahead of next season.

Champion told the club`s official website: “I am delighted to get it done, especially with the way that things are going at the moment. I am happy to extend, and I am looking forward to hopefully a strong finish at the end of the season.

“But, the on-the-pitch stuff is obviously the most important at the moment and I am really enjoying it.

“It is a great group of lads and obviously on-the-pitch, things are going well and there is still a feeling that we haven’t hit full stride. So hopefully, as I say, we can finish even stronger and have a successful end to the season and push on from there.”

Wood manager Luke Garrard spoke of his delight with Champion’s new deal: “I think that it is a very positive signing and it shows where we are going as a football club.

“I think that since he signed in the summer, he has been a model pro. He brings a professionalism and an understanding of the level, and he has made the right-side centre-half his own. I know him from our school days, having grown up with him, so I knew exactly what he was when he was coming into this football club, and he has been all that and more.

“Off-the-pitch, on-the-pitch and the coaching with PASE, I think that he has been exemplary; what he offers this football club is brilliant. I am very happy and hopefully we get a couple more over the line, in the coming weeks”.

 So Who Are The National League's Top Scorers? Goals win games and sometimes win leagues - and they also win Golden Boots!

Bath City Pick Up Rigg Following Exiles Exit  Bath City have signed attacking midfielder Sean Rigg on a deal that runs until the end of the 2018/19 season.