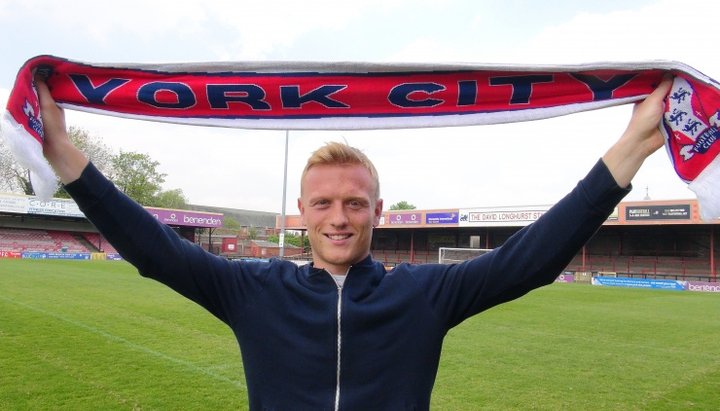 Burrow, 25, has played in the Football League for both Stevenage and Morecambe and won the Buildbase FA Trophy two years ago with FC Halifax Town.

The former England C international started his career at Chesterfield but made his senior debut during a loan spell with Boston United.

He scored 10 goals in thirty-nine appearances for Lincoln City in the 2014/15 season before notching 14 goals in forty-three league starts for Halifax in 2015/16.

Sheffield-born Burrow joined Gateshead in November 2016 and scored 10 goals last season as the Tynesiders finished seventeenth in the National League.

York manager Martin Gray said: "We have been monitoring him for a long time and he is exactly what we have been looking for in a striker.

"We are very fortunate to get him to come down to National North as he is a player who could certainly play higher.

"Hopefully he can give us the goals that we need to get a promotion. I am sure, in this league, he will be a real, real nuisance to defenders."

Burrow said: "We are not going to beat about the bush. Promotion is what everybody wants who is associated with the club. That's the reason I have come here.

"There are some strong teams in this league and some good players - so it's down to us to make sure that we do well."

Looking ahead to next season, he said: "The main thing you are going to get from me is 100 per cent effort. That's a guarantee. I am going to give everything I have got in order to be successful. The fans demand that and that's what they will get from me.

"I know quite a few of the lads - having played with them previously - Sean Newton, Simon Heslop, Hamza, and Russ Penn. They are a good group of lads and good players and we want a successful season.

"We want everyone pulling in the same direction to bring success to this football club," he said. "I know, over the previous seasons, there has been a bit of doom and gloom with the relegations but now it's time to kick on and get promoted.

"I have played here in the past and the fans are really good," he added. "It's always a good atmosphere."

 Super Sam Is The South's Star Striker! The Vanarama National League South season went to the final kick, but truth be told the Golden Boot was decided some time before.

Ball Says Lure Of League Football Too Much As He Leaves County  James Ball says joining League Two Stevenage is the perfect move for him after he joined from Vanarama National League North side Stockport County.