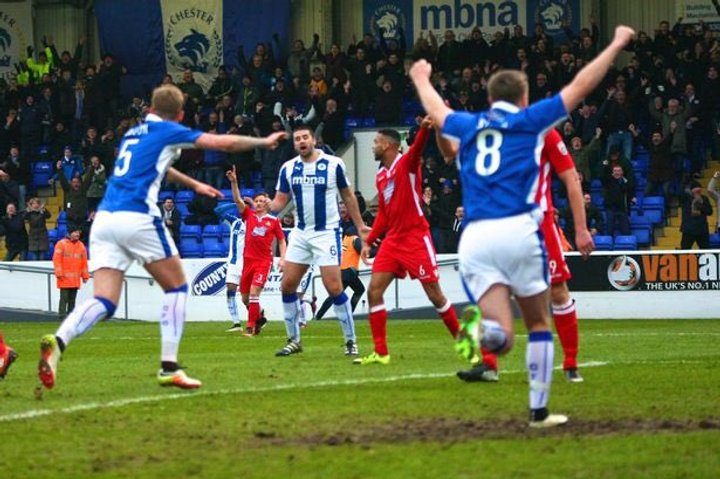 The 'Safe Transport' element enforced in fixtures between rivals Chester and Wrexham has been removed following an agreement between the two clubs and the Cheshire Police and North Wales Police.

Since Chester returned to the National League four seasons ago, away fans going to the 'cross-border derby' have had to travel via officially organised coaches.

But following a significant reduction in arrests and disorder at the matches, it has been agreed that the transport procedure will be removed.

A joint statement between Cheshire Police, North Wales Police, Chester FC and Wrexham AFC, read: "The intention has always been to return the fixtures to 3pm on a Saturday afternoon, with independent travel for supporters.

"In the continued interests of safety, the games will remain all ticket and the initial match at Chester will take place at 7.45pm on Friday 10th November.

"No arrangements for the return fixture at Wrexham have yet been confirmed and will be reviewed following the match at Chester.

"Two incident free fixtures will see these arrangements reviewed further and will support consideration of a move towards 3pm kick offs, also with independent supporter travel.

"However, it remains the responsibility of all fans to conduct themselves in an appropriate manner. Any inappropriate behaviour, incidents of disorder or damage to either stadium will not be tolerated and will give grounds for concern that the games cannot take place without continued safe transport arrangements.

"The driving factors behind the planning for these fixtures remain to reduce the potential for disorder, ensure the safety of fans, residents and visitors to Wrexham and Chester and to minimise disruption to local communities and businesses."

Chester CEO Mark Maguire commented: “From when I first arrived at Chester FC twelve months ago the “bubble fixture” has been a significant talking point, and it has been very clear that the vast majority of fans have felt that it inhibits a great fixture.

“Equally I have been impressed by the consistently expressed wish of both police forces to return this match back to a “normal” fixture with a 3pm kick off.

“To get there everybody concerned needs to take responsibility, and having pushed for this to happen we will now be calling about all right minded fans of both clubs to ensure that nothing takes away from what should be one of the highlights of the football calendar.

“The atmosphere on and off the pitch should be passionate, feverish and will mean the world to all concerned but it should stay within the rules and, particularly during a period of remembrance we hope that both sets of fans will create an atmosphere which convinces all concerned that this was the right thing to do.”

 Kinnear Sees Promising Signs In New Look Dover It's been all change at Dover Athletic this summer but manager Chris Kinnear is happy with how his new side is coming together.

Bromley's Game With Dartford Tomorrow Is Cancelled  Bromley’s pre-season friendly with Dartford on Tuesday night now will not go ahead, the clubs have announced this morning.