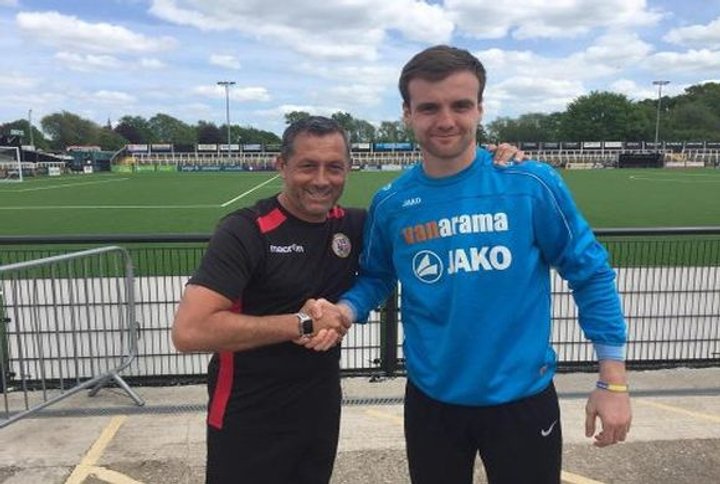 Bromley have announced that David Gregory and Jordan Higgs have signed new contracts with the Buildbase FA Trophy finalists.

Twenty-three-year-old goalkeeper Gregory, who has made the number one spot his own this season, has become a popular figure with Ravens supporters since joining from Cambridge United last summer, and is the only Bromley player to have appeared in every single league fixture this campaign.

Upon committing to the club for next season, Gregory told the club`s official website: “I’m really excited to have signed for another year, it’s been what I’ve wanted to do since Christmas. I was pleased to get plenty of games under my belt since joining last year, and I hope to continue that into next season.”

Alongside Gregory (pictured) and captain Jack Holland, who signed a new two-year deal back in February, Jordan Higgs has also put pen-to-paper.

The 21-year-old, who has played in numerous positions this season and cemented a regular place in the team throughout the campaign, is a product of the club’s academy, and has been coached by manager Neil Smith for a number of years.

Higgs was understandably delighted to extend his stay at the club he has represented since the age of 13: “I’m happy to have signed again and be a part of the journey this club is on. I’ve come through the youth system here and it’s been really exciting to see the progress the club has made during that time. I’m confident the future is bright for Bromley.”

Smith spoke highly of the pair and was pleased to keep them at the H2T Group Stadium: “I’m really pleased to keep them both. Jordan’s had a fantastic season so far, and hopefully that will continue into the FA Trophy Final. David has come in and really established himself, he’s played every game and kept twenty clean sheets. Hopefully he can make that twenty-one come Sunday week!

“To keep Jordan and David is a fantastic for the club, and I’m sure they’ll continue to develop with us”.

McGregor Has Big Plans For Weston After Cup Success  Weston-super-Mare ended their campaign on a positive note but boss Marc McGregor knows there is plenty of work ahead this summer.