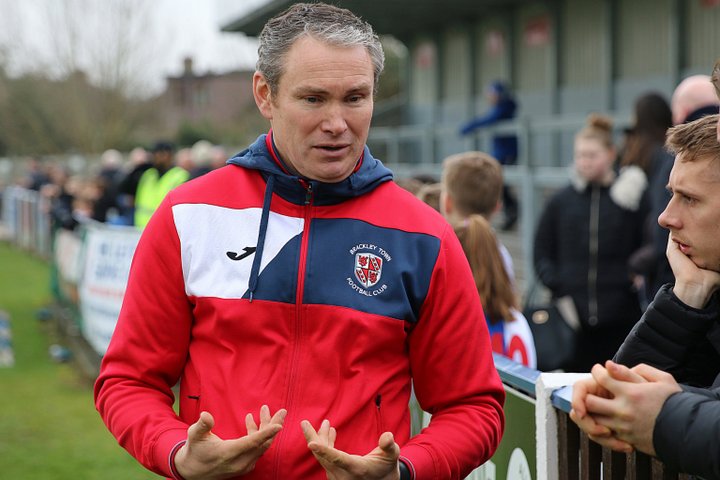 Kevin Wilkin admits it will be a “big ask” for Brackley Town to win the National League North after their late defeat at Kidderminster.

It was always going to be a tough few days for the Saints against Harrogate and the Harriers but Wilkin would have hoped for a better return of points.

A home draw with Harrogate was followed up with a disappointing defeat at Aggborough despite taking the lead in the 82nd minute.

They still have two games in hand but even with two wins, Wilkin’s men would still be five points adrift of leaders Salford City.

“It was disappointing especially after getting into a leading position,” Wilkin told the club’s website after the Kiddy result.

“Kidderminster are a good side who work the ball well. The goal to level it was one you can do nothing about. It was a terrific goal that rocked us back.

“Getting above the top two was always a big ask with so many games to play against top ten sides but we will continue to try to win each game that we play.  We want to cement the highest position in the League that we can.”

Dover's Youth Shows As Play-Off Hopes Are Dented  Chris Kinnear has told his young Dover Athletic side to learn quickly after their National League play-off spot was put in severe jeopardy.