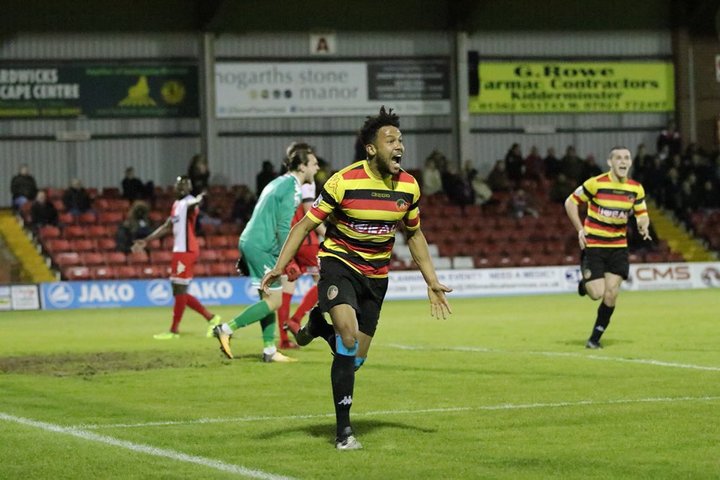 Mark Bower says Bradford Park Avenue can go into Sunday’s play-off semi-final at Brackley Town with no pressure on their shoulders.

Avenue shocked Kidderminster Harriers on Wednesday night, winning 2-0 at Aggborough after securing their play-off place on the final day of the season at the same ground.

It’s now six wins in a row for Bower’s side - a run that propelled them into the play-off places after it looked like their promotion hopes had been dashed.

They’ll head into Sunday’s National League North semi-final with plenty of confidence and Bower says the play-offs have been a very welcome bonus!

He said: “There is no pressure on us. I don’t think anybody inside or outside the club expected us to be in this position three weeks ago!

“All the other teams in the play-offs were probably targeting promotion at the start of the season but nobody really thought that was possible for us. We’re just enjoying playing in these big matches - we thrive on it.

“It was a fantastic night for us. You know when you play Kidderminster that you’re going to have to defend a lot and spend a lot of time without the ball.

“When you do get it, you need to be effective and we managed to get that early goal that gave us a platform.

“I’m so proud of the players. For a part-time team to come to a place like this, a full-time club, after the shift we put in on Saturday, it was a superb result.”

“Three or four of the lads in the dressing room were saying that they’ve got work at 6 o’clock in the morning!” Bower laughed.

“We’ll get the lads in on Saturday morning and prepare for Brackley on Sunday. It’ll be so tough, they’re a very good, strong side. They finished third, they’re in the FA Trophy final - that’s no fluke.

“We’ll go in as underdogs yet again but if we get the same application, effort and work-rate, we’ll give ourselves a chance.”

 Oliver Becomes The Latest To Leave The Shaymen FC Halifax Town have confirmed that midfielder Connor Oliver has become the latest to leave the Vanarama National League club after just one season at The MBi Shay.

Challinor Says Emotional Rollercoaster Is Worth It  AFC Fylde boss Dave Challinor says getting through to the play-offs is one of the best moments he has had in his career and wants to go even further tonight.