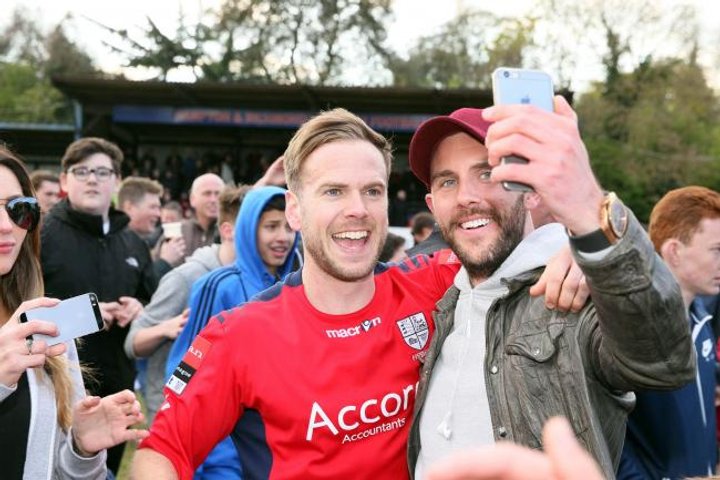 Hampton & Richmond Borough may be 21 matches unbeaten but their manager says he doesn’t think too much about it.

They are on the longest undefeated run in English senior football but the Beavers boss isn’t filling his players’ heads with compliments.

Hampton are second in the division and on Saturday continued their fine form by beating promotion rivals Chelmsford City at Melbourne. Watch Match Highlights Here:

But there is no talk about continuing this fantastic run until the end of the season.

Next up it’s Bath City at Twerton Park this weekend and the manager knows feelings can change in a flash.

“We haven’t talked about it too much, that’s the truth,” said the former Kingstonian and Walton and Hersham boss. “It can’t take over.

“It’s brilliant of course but I don’t go telling the players how great it all is! We’ve got a job to do, it’s always onto the next match.

“We’re doing very well but that’s the thing about this game. It can change just like that and you are back to square one before you know it.

“We’re enjoying the season, to be where we are in the table and to have not lost a game for nearly five months in the league? Well the players deserve all the plaudits. It’s very special.”

Dowson takes his side to Bath City on Saturday, Jerry Gill’s team losing 4-2 at Weston-super-Mare on Tuesday night.

 Eisa Is The Latest National League Star To Move On Up! Another National League player has sealed a Football League move as Wealdstone attacker Abo Eisa has signed for League One promotion hopefuls Shrewsbury Town.