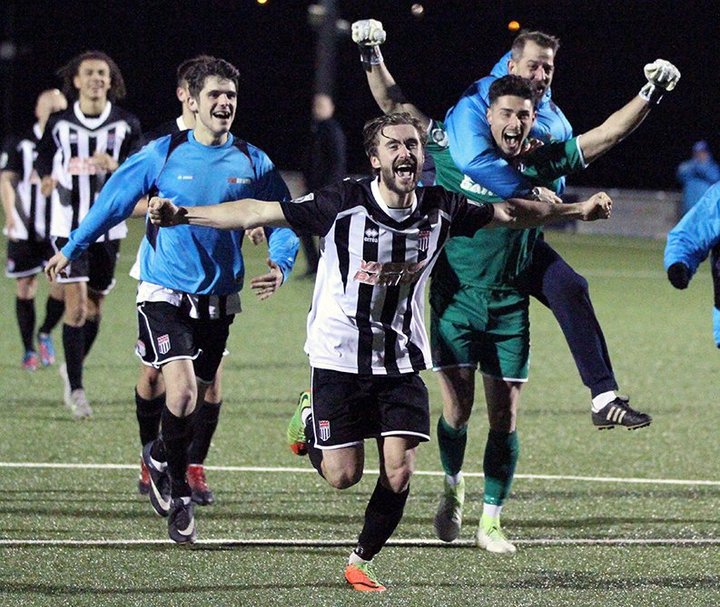 Bath City will travel to Hendon on December 16th for the First Round of the Buildbase FA Trophy after overcoming the Greens Bostik League Premier rivals Margate on penalties in their Third Qualifying Round replay on Tuesday night at Hartsdown Park.

There was the curious situation of the officials having to delay the kick-off until 8.20pm due to the non-arrival on HOME players due to a traffic incident on the M2!

But it was the lower league side who took the lead on the half-hour mark when Dave Martin let fly from long-range and found the back of the net as the ball squirms through Bath keeper Luke Southwood's hands.

Margate deservedly held that lead until the break, but 8 minutes into the second half, Bath levelled when Jack Compton curled a fine free-kick into the top corner past Gate `keeper Patrick Lee.

Just shy of the hour-mark, Southwood prevented the Romans from falling behind again when he made a fine save to deny Jordan Chiedozie.

That proved crucial, as just 3 minutes later, Crompton put Bath in front with a 30-yard pile-driver.

With 11 minutes of normal time remaining though, a terrific volley from Lee Prescott put Margate level once more.

And in the 89th minute, the home side almost won it, but Southwood made a quick double save and sub Jay May rattled the bar with a header.

So, it was going to be an even later night as extra-time began and it was the hosts who came closest to preventing penalties when Frannie Collin crashed the ball against the crossbar after good work from sub Liam Enver-Marum.

But it was to a shoot-out which Bath triumphed 5-4 – although it was almost breakfast time on Wednesday morning when the team and supporters made it home from their 400-mile round trip!

 Mellon Wants To See His Tranmere Side Boxing Clever Micky Mellon expects his Tranmere Rovers side to be fighting fit after a session with boxing trainer Sean Trodden, writes Steven Coney.

Late Drama Sees Points Shared At Harrogate  Harrogate Town had the chance to reduce the deficit between them and Vanarama National League North leaders Salford City to eight points when they hosted Kidderminster Harriers at the CNG Stadium on Tuesday night.