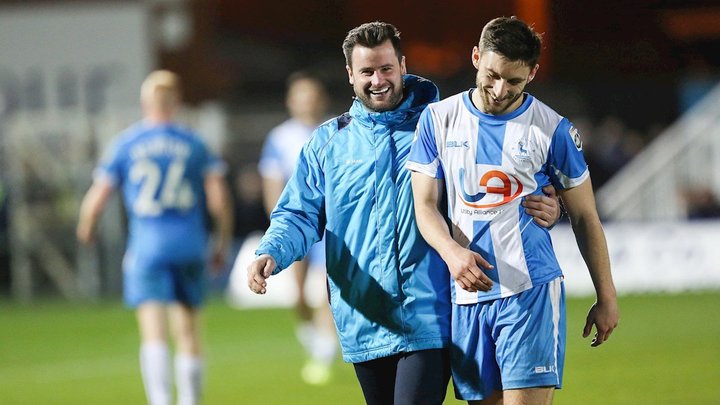 Matthew Bates was full of pride after seeing Hartlepool United secure their National League status for next season.

Pools put in a gritty performance to beat Leyton Orient 1-0 at Victoria Park thanks to Louis Laing’s first-half header.

It has been a difficult season on and off the pitch for the club but Bates has reinvigorated the team since taking charge after Craig Harrison’s departure.

A run of four wins in seven matches has secured Pools’ place in next season’s National League line-up and Bates rightly had a smile on his face after the Orient victory.

“I feel pride, relief and like a weight has been lifted off my shoulders,” Bates told Pools PlayerHD.

“It wasn’t pretty today but sometimes you can’t be but defensively we were outstanding, especially in the second half.

“I’m proud of the lads, I thought they were brilliant and I don’t think you can underestimate what they have had to put up within the last few months.

“I know we don’t want to be where we are in the league but if you take the last few months in isolation they’ve put up with a lot on and off the field but nobody has ever complained.

“Hopefully the shackles are off on Saturday because I want to still win games so we keep going and pick up as many points as we can.”

 National League Team of Tuesday: Who Made It In? There may have only been seven games, but we rarely need an excuse to bring you a Team of Tuesday Night.

Cornish Dream! It Looks Like Good News For Truro  Truro City’s dreams of a new stadium are a step closer to being realised.