All You Need To Know: Vanarama National League Play-Offs 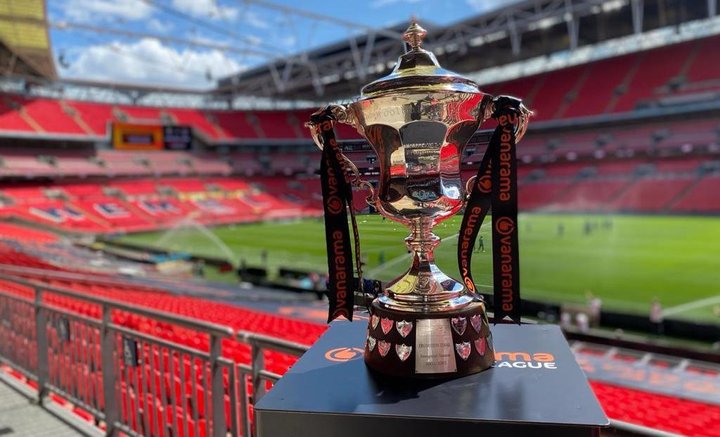 With that brings five season-defining games- shown exclusively live by BT Sport- to see which side will join champions Sutton United in achieving promotion to the EFL’s League Two.

This weekend, Notts County host Chesterfield before Bromley visit Hartlepool United in the Vanarama Eliminators. These games will decide which sides will face Torquay United and Stockport at the Semi-Final stage.

The Format and Notable Rules

• Each play-off fixture is a one-off match- games must be decided on the day.
• The match schedule was organised via the use of final league rankings. The schedule can be found here.
• Should a match be level after ninety minutes, extra-time will be played. Should a game remain level after extra-time, there will be a penalty shootout to determine the winning team.
• Both sides will be able to utilise a fourth substitute during the period of extra-time.

With Wembley Stadium unavailable due to hosting Euro 2020 fixtures, the Promotion Final will be held away from London on Sunday 20th June for the first time since 2011.

Ticket details will be confirmed once both finalist clubs are known.

AFC Wimbledon were the last winners of a Promotion Final away from Wembley ten years ago, with Danny Kedwell the penalty shootout hero in Manchester against Luton Town.

Of the five Promotion Finals not under the famous arch, four have been decided in extra-time or via a penalty shootout.

History- Is It All About the Finish?

This is the fourth year of a six-team play-off format in The National League.

In the Vanarama National League, no side finishing outside of the top two play-off spots has achieved promotion to the fourth tier since the format was introduced.

The 2017/18 league runners-up Tranmere Rovers overcame a very early red card to claim a 2-1 victory at Wembley over Boreham Wood.

Micky Mellon’s side had defeated Ebbsfleet United in extra-time of a thrilling Semi-Final at Prenton Park.

The following season, Salford City became the first side to achieve back-to-back promotions to the EFL, securing their fourth-tier status with a three-goal win versus AFC Fylde.

Like Tranmere, second-place Harrogate Town made up for falling just short of the title by earning promotion via the play-offs.

The Yorkshire outfit also beat Boreham Wood on their way to promotion, but it was Notts County who fell to defeat at Wembley.

Only twice in the National League North and South has there been play-off winners playing in the Elimination Round.

Underdogs Braintree Town came through an incredible three away games in less than a fortnight in 2018 to achieve promotion from seventh place.

Last season in the North division, Altrincham spoiled Boston United’s final ever match at York Street to join King’s Lynn Town in achieving Step One status for the 2020/21 campaign.

Dan Mooney’s second-half strike was the difference for a side that had performed excellently to beat Chester and York City in previous rounds.

How Can I Watch the Matches?

Each Vanarama Eliminator and Semi-Final will have a socially distanced capacity of home supporters present. For the Promotion Final, a limited number of both set of supporters will be able to attend.

All five play-off matches will be shown exclusively live on BT Sport.

National League's May Monthly Award Winners Revealed!  After a challenging season like no other, May was when we started to see some silverware placed in hands.