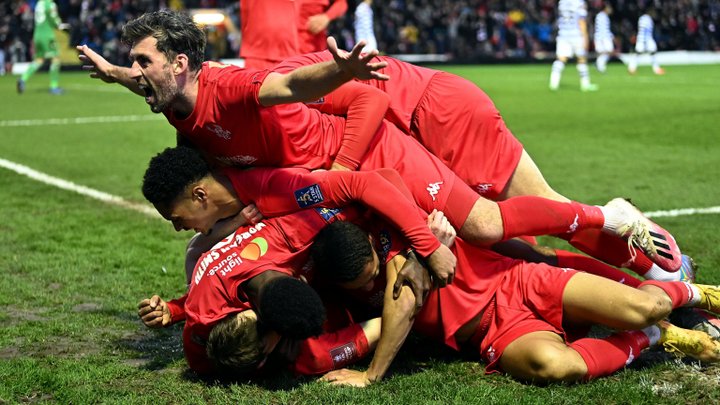 There was plenty of National League excitement as some huge FA Cup headlines were written.

Boreham Wood and Kidderminster Harriers did us proud in the third round - beating AFC Wimbledon and Reading respectively.

While they were in action FC Halifax Town went top of the National League in style as their rivals went for cup glory.

A 4-0 win over Eastleigh took them to the summit - Jordan Slew was at the double with goals also coming from Jamie Allen and Matty Warburton.

Bromley are third. Scott Wagstaff scored on his debut in a 2-1 victory against Solihull Moors.

There was a huge game at the wrong end - a 1-0 Southend win at Weymouth put daylight between the Blues and the bottom three.

Matthew Dennis continued to impress the Roots Hall faithful with the decisive goal.

Dagenham showed their promotion resolve, coming from 2-0 down to claim a valuable point.

Angelo Balanta make the trip home to London so much better for the Daggers’ team.

Mitch Brundle was the Barnet hero as he scored late to seal a 1-1 draw with Altrincham.

There are two other brilliant title races brewing.

They defeated Hereford 1-0 - the winner coming from Tre Mitford.

But the big game between Chorley and Gateshead saw the country’s only 100 per cent home record go.

The winner arrived from Mike Caleveley and it moved the flying Magpies into second.

Elsewhere there were big wins for Curzon Ashton, Bradford PA and Spennymoor as Ryan Hall’s winner got the better of Guiseley.

The battle for top spot in the National League South is sensational.

Ebbsfleet United lead the way - Craig Tanner got two as the Fleet won 3-1 at Hemel Hempstead.

But beware Dorking who are in form and won 2-1 against Braintree Town. Alfie Rutherford can’t stop scoring and he got two more.

Jake Robinson gave Dartford a lift as he earned Steve King’s side a point in a 1-1 draw at home to Dulwich Hamlet.

Jordan Young and Ricky Aguiar both got two goals as Chippenham hit Slough Town for six.

Elsewhere there were wins for Chelmsford City, Hampton, Tonbridge and St Albans.